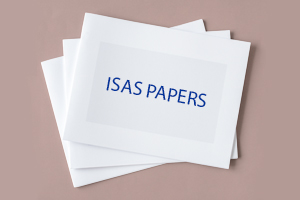 Analysing the Crackdown on the Pashtun Movement in Pakistan

Over the past week, several activists of the Pashtun Tahaffuz Movement have been detained across Pakistan. This paper analyses the reasons behind this.

Over the past week, several activists of the Pashtun Tahaffuz Movement (PTM) have been detained across Pakistan. The PTM emerged in 2018 within the backdrop of the Pakistani military’s attempts to weed out militancy in the erstwhile Federally Administered Tribal Area (FATA). Military operations resulted in thousands of Pashtuns being arrested without trial and almost a million people being displaced.

Through mass rallies, sit-ins and its active social media presence, the PTM calls for judicial inquiries into the disappearance of thousands of Pashtuns, an end to what it describes as military atrocities, and the release of political prisoners. Moreover, PTM leaders accuse the military of fanning the militancy in the first place with a view towards achieving strategic-depth in Afghanistan and lament that they have been caught in the middle of the military’s “good Taliban-bad Taliban” policy. Such an open critique of the military is rare in Pakistan. More broadly, the movement accuses the Pakistani establishment of discriminating against the Pashtuns.

On its part, the establishment has been concerned by the rise of Pashtun ethno-nationalism. After all, the Pashtuns straddle the Durand Line, which divides Pakistan and Afghanistan. The military has accused the PTM of being funded by Afghanistan (and India) to destabilise Pakistan.

The establishment has, however, not had a clear policy of how to respond to the PTM. It has sporadically arrested activists and deployed force. In May 2018, for instance, soldiers shot dead three activists at a checkpoint in North Waziristan. In addition, strict censorship has been imposed on media coverage of PTM activities. It has also attempted to prop up and use maliks (tribal leaders) as mediators. Despite these, the PTM continues to expand its support base.

The recent crackdown indicates a concerted approach to negate the influence of the movement. On 26 January 2020, the movement’s charismatic leader, Manzoor Pashteen, was arrested on charges of sedition. More arrests of PTM activists across Pakistan followed. This new approach is in response to socio-political developments that may further galvanise support for the PTM and growing concerns over the appeal of the PTM’s message to other groups.

The semi-autonomous region of FATA was merged with the province of Khyber Pakhtunkhwa in May 2018. Prior to this, FATA was allowed limited political representation and governed by the Frontier Crime Regulations, a series of colonial laws that limited legal and constitutional rights. While the merger was welcomed as a means of introducing reforms and development to the areas of FATA, the lack of judicial, political and economic reforms has given rise to discontent and a sense of discrimination. On 14 January 2020, members of the Khyber Pakhtunkhwa Assembly, who hailed from districts previously part of FATA, staged a protest in parliament alleging discrimination and demanded more representation in parliament.

Opposition has also arisen against a bill passed in the Khyber Pakhtunkhwa Assembly in November 2019 that declared that all mines and minerals in regions previously part of FATA were now government property. Prior to the merger, natural resources in FATA belonged to local tribes. Despite vociferous opposition, this bill was pushed through the Assembly without a debate.

The establishment fears that this sense of political and economic marginalisation will attract support for the PTM. While the established political parties were silent on these issues, the PTM linked economic and political grievances within a wider narrative of Pashtun displacement. Pashteen asserted that the natural resources belonged to “indigenous Pashtuns” and pointed to a wider conspiracy to politically and economically disenfranchise the Pashtuns. In addition, the PTM has won support amongst the traders due to its demand that the government compensate losses that resulted from military operations. Of particular concern to the establishment is the fact that the PTM’s stance on economic marginalisation mirrors that of groups in Balochistan that are resisting what they view as the exploitation of their natural resources.

The appeal of the PTM beyond the districts of FATA and its traditional support base concerns the establishment. Recent PTM dharnas (non-violent sit-in protests) have attracted support and active participation from movements like the left-wing Awami Workers Party. More generally, Pashteen and the PTM have emerged as symbols of resistance against the military. Pashteen’s slogan “ye jo deshat gardi hai, is ke peche vardi hai” (“the uniform is behind this terrorism”) has gained popularity. This is particularly salient, given the concerns over the political role of the military in Pakistan.

The new approach towards the PTM is also reflective of the fact that the movement has disrupted the establishment’s attempts to employ censorship and patronage to assuage discontent. In the face of media censorship, the PTM and its supporters have extensively used new media such as Twitter and YouTube. At PTM rallies, protestors often come armed with flags, banners and smartphones. The movement has also disrupted established networks of patronage. It has not only openly challenged the military, but also the authority of the maliks who the military relied on previously. Indeed, the PTM accuses the maliks of being complicit in the underdevelopment of FATA. This differentiates the PTM from previous Pashtun movements.

What impact the recent spate of arrests has remains to be seen. As it stands, PTM activists have already issued calls for more mass protest.

Associate Professor Iqbal Singh Sevea is a Visiting Associate Research Professor at the Institute of South Asian Studies (ISAS), an autonomous research institute at the National University of Singapore (NUS). He can be contacted at iqbal@nus.edu.sg. The author bears full responsibility for the facts cited and opinions expressed in this paper.